Camden had his first appointment at Shriners Hospital for Children today! We had such a wonderful time and we feel truly blessed with our whole experience! Everyone we met was so sweet and welcoming!! They made us feel right at home and we cannot wait to go back!

Camden had an Xray done to see what his spine looks like and to see if he had any kind of bone around his hips at all. We were told that Camden has a great spine and some femur on his left hip, but he just doesn’t have enough down there to get prosthetic legs. A man that works with the wheelchairs came in and said that when Camden is around 2 they will work on getting him a cool wheelchair that he can make move around with his arm or with his head, whatever will be best for him at the time.

Camden wont be getting prosthetic arms any time soon, which I figured anyway, but I didn’t know it would be 7-10 YEARS from now! They said his muscles and joints and all that good stuff need to mature before they add all that extra weight on there. They also said he will have a higher chance of taking well to them when he is older rather than younger. He will get aids for his arms from his Occupational Therapist as he gets older to help him eat, brush his teeth, draw, and all kinds of other stuff to help him be independent!


The nurse practitioner we saw today wrote a prescription for Camden to have an ultrasound of his kidneys done. She said that in a lot of cases with limb deformities, there is something wrong with the kidneys. They just want to rule out that problem or catch it early if there is a problem.

In between waiting for different people to come in our room to talk to us, the nurses kept bringing in more and more stuff that people had donated the day before. We couldn’t believe it! Everything that they brought us was such nice things! I was surprised it fit in the car with our suit cases! After we got home I was looking at everything and I realized some of the stuff was very expensive and from what I could find, everything totaled up to be over $800! And all I can say is, WOW! I just want to thank Shriners Hospital for Children for truly caring for my son and giving him everything that he needed!! I don’t know how you knew what he needed, but you did. It had to be God! We are just so thankful and I just can’t say it enough!

When we were about to leave one of the Shriners came up to us and made sure that Camden got a new toy! He picked out this lion. 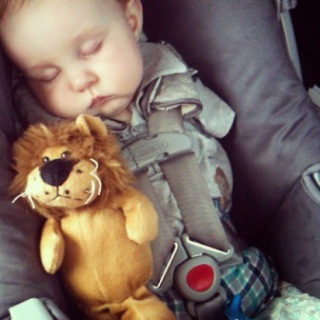 I also want to thank Shriners for believing in my son and for being so willing to give him all the chances that he deserves! Thank you for not saying that he couldn’t do something. You guys are EXACTLY who we were looking for! Oh, and you guys did a good job thinking about that nursing pillow being a support to help Camden learn how to sit up! So far that is his favorite gift!! THANK YOU!! 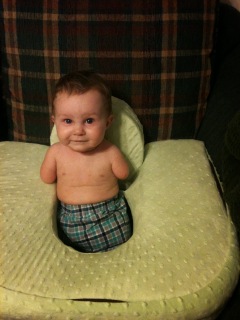 11 thoughts on “Our First Visit to Shriners Hospital for Children”