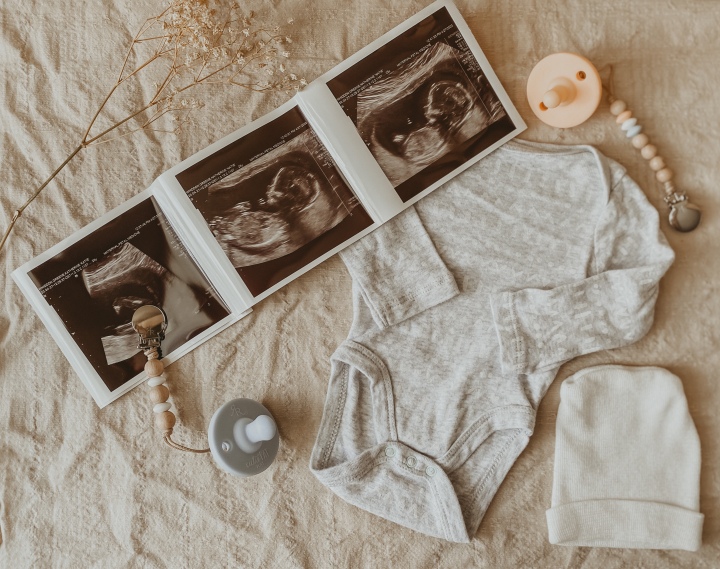 Remember how we said we were DONE having babies? Well, God laughed and said He has a totally different plan. (Also, don’t put your faith in condoms lol. According to Planned Parenthood 15 out of 100 people who use condoms as their only birth control method will get pregnant each year. Awesome. 🤦🏼‍♀️) I was pregnant on my wedding day and didn’t even know it! I took a pregnancy test when I missed my period a few days before my wedding, but it came up negative so I assumed it was all of the insane wedding stress. I’ve gone 3-4 months without a period before, due to stress, so I didn’t second think it. I waited and waited and my period never came. Took another test out of curiosity, even though I had absolutely no symptoms at all, and it came up positive right away. I was in such shock that I couldn’t tell Cole myself. I waited HOURS for him to walk in our bathroom to see the test. He was as shocked as I was. I went to see a MFM a few days later confirm and see how far along I was, and sure enough, there was a little bean with a 119 heart rate due October 2020.

On April 16th I went for my 12 week (curbside, thanks to rona) appointment with my midwife. We couldn’t find my baby with a Doppler or a non-diagnostic handheld ultrasound. Possible missed miscarriage. I had to go back to the MFM to see for sure, but I knew what I saw. A big black sack with no baby. With a missed miscarriage, even though your body absorbed the baby, your uterus can still grow. You can still feel pregnant because you still have the hormones. Your body just doesn’t let go easily. I hated that I felt pregnant and have possibly been going through months of sickness that has kept me in the bed all day, just to likely end up with empty hands. I never had a miscarriage before and my heart ached so badly after the news had time to settle.

On April 27th I went to see the MFM again. She put the wand on my belly and immediately we saw the top of a round head. She moved it to the side and there it was. A fully formed and healthy 14 week gestation baby moving all around. 😭🙌🏼 (I think what happened at my 12 week appointment is that we were looking at my extremely full bladder that pushed my uterus out of the way lol. I was almost at the point of peeing myself and I really should’ve informed my midwife. Oops lol.) I FaceTimed Cole during the ultrasound and gave him one of the biggest shocks of his life. Then together we found out the sex of our baby. He couldn’t hear whether I said boy or girl. So I yelled out “IT HAS A __!” Such a whirlwind of emotions. Thankful and relieved, but also really scared because this is such a scary time to have a baby and sad because I know a lot of people won’t be happy about this baby because it’s our 6th. But our God’s plan is greater than anyone else’s and we are so grateful.